Making a Difference in the World

Mixed media piece of Ganesha, “Those who wish to leave footprints will never fly”

I know there must be others, who feel the unrest and wish that they could do something to help foster peace. At times it can seem overwhelming with everything in the news. It can make us weep at how others are treated and make us think, that as one individual, we can’t make a change. I too have felt this things, but I have also realized that, as one I may not cause a big wave of change, but as a group we can. Two opportunities have come about this week to participate in and begin that wave.

Think of us all in a giant football stadium. I use the term “football” because throughout the world we all have one, whether we play American football, rugby or soccer. Now imagine that one person raises their hands and stands up. Soon others join in and eventually a giant wave begins to roll throughout the whole arena. It takes a few trips around to create momentum, but even if you originally didn’t want to participate you get caught up in it. This is how we can begin to cause a change in the world. Mother Theresa tells us to “be the change you wish to see in the world”, others have said, “to act as if and the change will happen.”

In the early 2000s I was searching for a way to understand it all. I had been teaching yoga for a few years and one day it dawned on me, that even though we may all have different belief systems, we would all come together every week to practice our yoga and meditate on making ourselves better people. I wondered if there was a way to do the same in the outside world.

I joined the Seminary of Spiritual Peacemaking, a true seminary, but with a different name and a different philosophy. I wanted to learn of the world’s religions, not of just their differences, but more importantly what the commonalities were. Trust me there are many. I felt if we could focus on what was the same, what was in-common, then we could begin a dialogue of change. I spent two years studying, receiving my Masters in Divinity and a title I never use, Non-Denominational Minister, except when my children call me out on something with “Reverend Pam”, our children truly are our greatest teachers. 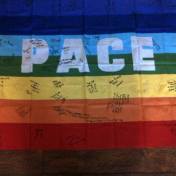 3/ “The peace troubadour”  Jimmy Twyman  and myself at the Vatican

During that time I had one of the most life altering experiences. In 2005, I traveled with 70 Spiritual Peacemakers from 17 countries on a 130 mile 9 day journey following in the steps of St. Francis of Assisi, for a pilgrimage of world peace. Along the way we were greeted with much love and support by the Italian people. Even at times as TV stars as the Italian news followed us. On the walk I saw beautiful sights, experienced shifts and made life long friendships. On September 21st (United Nations World Peace Day) we made it to Rome and to an audience with Pope Benedict. That long journey from Assisi to Rome tested me physically, mentally and spiritually. One big lesson it did teach me was, that as one person we can make a small ripple,but joined by others we can make a big wave.

Now onto the two opportunities I spoke of to create a ripple of peace. This past week my friend Jimmy Twyman (in the picture above) traveled to Syria to hold a peace concert in the war ravaged area and on February 1st, to be the anchor of a world wide peace prayer. Hundreds of thousands of people joined in at specified time, for ten minutes, to hold the vision of peace in the world. A monastery that I’ve worked with in Southern India, the Drepung Gomang Monastery, also joined in from their prayer hall, where thousands of Buddhist monks prayed for peace. Now the media was calling him crazy, that he was going to end up hurt or even killed, but I’ve seen Jimmy go into other places in the past to do the same; Bosnia, Iraq, Jerusalem, so I knew he would be safe. He was joined on the ground with leaders of the three Abrahamic traditions; Judaism, Christianity and Islam.

In a post after the prayer vigil to those who joined him in prayer, he told us that “just before we began the world synchronized meditation, a battle raged in the village directly across from us. The sound of guns and mortar shells rang through the air. As we approached the time of the vigil something suddenly changed. The fighting stopped and everything grew calm. Around 100 people were present with us as we watched the villages and we began holding silence as people around the world began sending their prayers of peace. It felt like healing rain was falling all around us. When the vigil closed we were amazed to hear a pack of wolves begin to howl for exactly 1 minute just beneath us, as if the earth itself felt our prayers.”

Those on site at the prayer vigil planting a peace pole, photo courtesy of James Twyman

The second opportunity to join in and participate with the peace ripple affect is coming up and I hope that you might join me with this. There is an organization that since 1994 bi-annually gathers art work from around the world and distributes it among the participants. The idea behind this peace project is that we can create community among us through a gift of global friendship. This wonderful project was nominated for a 2002 UNESCO Peace Prize for tolerance and non-violence. This is how it works it works, go to their website at http://www.globalartproject.org and register. They will then match you up with someone else in the world. The art exchange occurs during the week of April 23-30  “resulting in thousands of people sending messages of peace around the world at one time—visions of unity simultaneously encircle the Earth.” You may be saying but I’m not an artist, that doesn’t matter, in fact this is open to adults as well as children and the art can be anything created with love. In a past global art exchange I received a beautiful book of hand written poems. 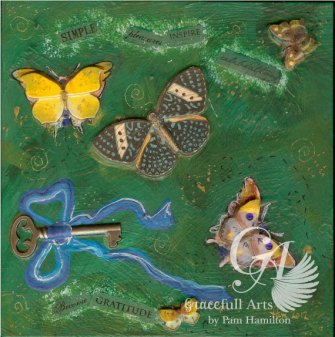 Students in Kita, Mali who sent their art to The Village School, California, USA.*

Annette Hoermann from Bruxelles, Belgium was sent to her partner in Prescott, AZ, USA.*

So do you still think that one person can’t begin a ripple to change the world? Remember even a kind smile can change a persons day. Hop on board with me on the wave of change, I”ll be the one standing next to you in the arena. Till next time keep the waves of change rolling.

Posted by gracefull_arts in Uncategorized

The Illustrations and Blog of Pat Achilles

The latest news on WordPress.com and the WordPress community.